Eventually, everyone sees floaters- the dark wavy lines or spots or cobwebby filaments that drift lazily through the visual field of one eye or the other. Quick eye movements up, down or sideways will clear them from your line of sight, but slowly, because floaters move through a jelly like substance in the center of the eyeball. Like the ghosts wandering around Harry Potter’s Hogwarts School, ocular floaters are most often harmless annoyances. And like so many of life’s problems, they are an accompaniment of aging, particularly in people who are nearsighted (those who require glasses to see clearly at distances).

Blame aging
Aging produces changes in collagen, the structural protein that gives form to much of the body. As a result, we develop skin wrinkles, stiff tendons, unpliable heart valves and brittle cartilage, to name just a few obvious accompaniments of living to old age. Few people know that there is collagen in the middle of the eye, which is filled with a glob of jelly-like material called the vitreous humor. Most descriptions of the vitreous humor conjure up a picture of a clear, colorless ball of Jell-O that fills the posterior chamber of the eye (the space between the lens behind the pupil and the retina lining the interior of the eyeball). The vitreous keeps the eyeball from collapsing and helps hold the retina in place.

But appearances are deceiving. Though the transparent, jelly-like glob is composed of 99% water, it is also a delicately complex structure in which collagen plays an important  structural role. Like skin, the vitreous ages. Along with the years come the floaters.
You are born with the vitreous humor in place. Should it be removed, by surgery or trauma, you will not grow another. This is in contrast to the aqueous humor, a clear liquid that fills the space between the cornea that protects the eye and the colored part called the iris (called the anterior chamber of the eye – see diagram). The aqueous humor is manufactured by the ciliary body, a muscular structure that gives rise to the iris. From its manufacture point just behind the iris, the fluid circulates through the pupil, fills the space behind the cornea, and exits via a channel  formed by the junction of the iris and the cornea. This evenly balanced system of fluid manufacture, circulation and exit controls the pressure within the whole eye. No such recycling system exists for the vitreous humor – as in Las Vegas, what happens in the vitreous humor stays in the vitreous humor. 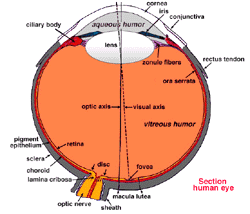 What happens without recycling?

The  collagen structure within the vitreous humor is an airy honey-comb of interconnected collagen fibrils – microscopic fibers cross-linked and held apart by chemical and electrostatic forces. The network is loosely attached at some points to the retina that lines the inside of the back of the eyeball. The spaces in the honeycomb contain a solution of many minerals and polysaccharide molecules (chains of sugars) dissolved in water. The collagen network is, in part, held open by the pressure of the watery solution. With age, the system has mini-collapses of collagen fibrils, resulting in some clumping of the collagen networks. Floaters are the result. Occasional macrophages (white blood cells that clean up debris) float about, but they are a lonely workforce.

When are floaters more than a nuisance?

A sudden increase in the number of floaters, accompanied by transient light flashes, is sometimes indicative of a segment of the vitreous pulling away from an attachment point on the retina. This condition is known as a posterior vitreous detachment. By itself, a posterior detachment is not a serious problem, but occasionally the point of shrinkage also pulls the retina away from the vascular layer underneath it. Now you have a retinal detachment, and your vision either develops a blind spot or the sensation of a curtain pulled over part of the visual field. Such symptoms require immediate ophthalmologic evaluation and treatment to prevent further detachment of the retina.

There is no special treatment for floaters but at times, floaters are troublesome enough for an ophthalmologist to attempt to remove the vitreous humor entirely. The surgery is very difficult and fraught with hazards such as retinal detachment or damage resulting in partial blindness.  Called a vitrectomy, it is a procedure done more often  for other reasons such as  eye trauma. After vitrectomy, the vitreous has to be replaced to maintain the shape of the eye. Research by physicists and bioengineers on suitable replacement substances has been the biggest source of information about the physical nature of the vitreous humor and the origin of the near universal phenomenon of floaters. However, to date the replacement is still done with saline, which is then naturally replaced by the same fluid that fills the anterior chamber.

What happens once you begin to notice floaters? They come and they go – eventually sinking out of view. The process is very slow because there is no circulation pattern in the vitreous humor and the body has not assigned a vigorous cleanup crew to the problem. Because of this slowness, and because the vitreous passively absorbs substances from the bloodstream via the blood vessels in the retinal layer, coroners sometimes use the vitreous humor to search for toxic substances like drugs at autopsy. Chemical traces remain there after they have disappeared from other body fluids; and. the vitreous humor also retains its integrity longer than other parts of the body.

As for “seeing” floaters? You are not actually looking at the clumps of collagen. Just as in Plato’s story about people in a cave interpreting shadows created by firelight as reality, you see only the shadows of floaters cast on the retina by light coming through the pupil. For this reason, floaters are clearest when you are looking at a bright background such as snow or water. Even when you see floaters with your eyes closed, light is passing through the thin eyelid and into the pupil, the only opening in an otherwise light proof box. Who knew these little annoyances could illustrate a philosophy lesson?